This is a simple example comprising a single scroop with a sound that is activated once the user enters the circle associated with the scroop.

In this example it is shown how to build a very simple tour. One scroop is assigned to be the start scroop, and then a succession of next-scroops is constructed, so that each is activated only after the previous scroop in the succession has been activated.

In this example it is shown how one can build a yarn, comprising two scroops (a yellow and a blue one) with identical shapes, where the sound of the yellow scroop is heard only when the user is inside its shape, whereas the sound of the blue scroop is heard only when the user is outside its shape. This way a simple aural interface can be built to guide the user on the correct path. Although it is not done in this video, the two scroops could also be chosen to be hidden at all times and not displayed on the map, in order to create a game on that premise.

labyrinth from soundyarn on Vimeo.

Initially, two polygon-shaped scroops are created, one for each of the two versions of the music track. The two music tracks are of the same length, and one is simply an edited version of the other, emulating the indoors accoustics (the effect has been applied using some other audio software). Furthermore, the volume function of both polygon scroops is set to be constant while the user is inside the polygons and zero when outside. This way, when the user goes from being inside the outer polygon to being inside the inner polygon, the music changes as if the user moved from outside a building, to the inside of that building.

Finally, a scroop of circular shape is added, being the start scroop with no associated sound, whose function is primarily to sync the two sounds associated with the two versions of the music track.

inside-outside from soundyarn on Vimeo.

In this example, a yarn is created that can be used by joggers, where music is only heard when the jogger is running. The yarn comprises 3 simple circle scroops, a blue, a yellow and a red one. The condition for the blue and the yellow one is set so that it can be activated only when the speed is at least 3m/s. The red one is activated when the speed is lower than 3m/s.

When the red scroop is activated (only at speeds lower than 3m/s), the volume of all playing sounds is dropped to 0, since the red scroop has the overlaid property set to 0.

The blue scroop is a start scroop and has the music sound associated with it. It has only one next scroop, the yellow one. The yellow scroop has as a next scroop and as a stop scroop, the red one. Thus when it gets activated (the speed is at least 3m/s) the red scroop stops and the volume of all playing sounds is raised at full volume. Finally, the red scroop has only one next scroop, the yellow one, and in this way the yarn goes from the yellow scroop as a state to the red one and back to the yellow one, whenever the speed of the jogger increases or decreases. In the simulator the slow speed is represented by 'walking' and the faster one by 'bike'.

Need for jogging speed from soundyarn on Vimeo.

This example shows the creation of a sonic wall, or fence, in a park landscape. The sonic fence emits an alarming sound whenever the user steps outside the green scroop. This sonic fence can be deactivated by locating the hidden switch, depicted by the blue scroop. The latter can be found by following the ambient soundscape (the red scroop) that increases in volume as the user approaches the location of the switch.

Sonic Wall from soundyarn on Vimeo.

In the video below, it is shown how the yarn depicted in the figure below would be experienced while driving at that location.

Credits: The piece The Word Love by Gigi Masin appears in the video.

The final yarn for the video above: 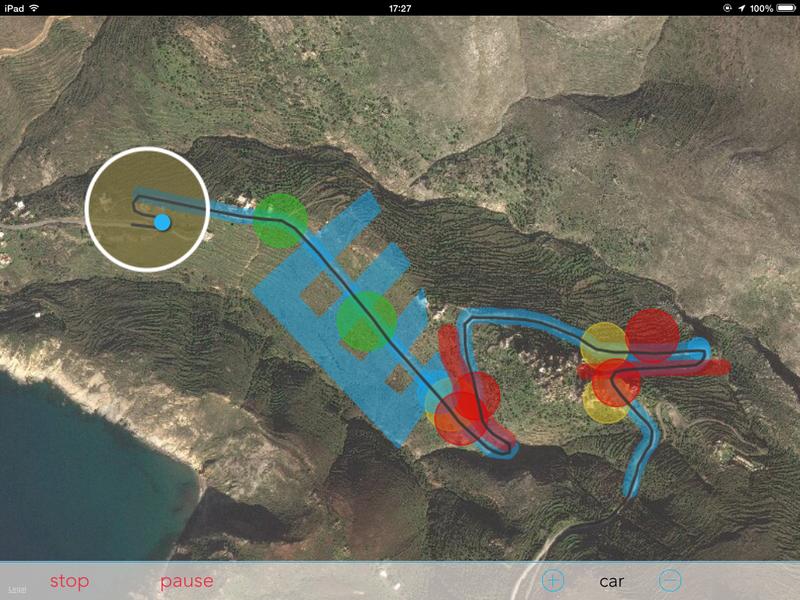